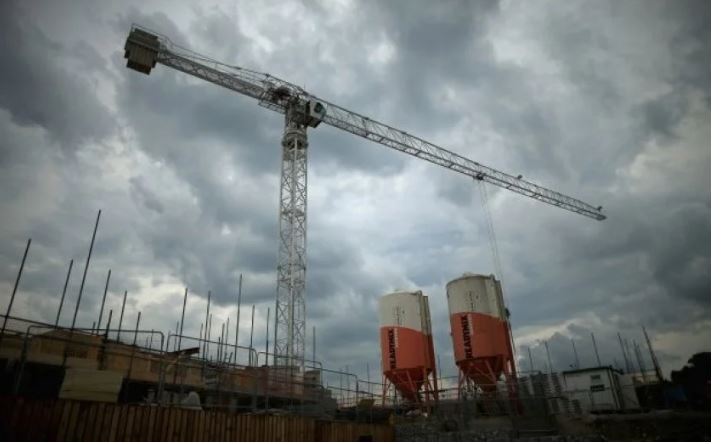 The UK’s construction industry activity sank for the fifth time in six months in July as economists all but ruled out a swift turnaround, a closely-followed measure of sector activity revealed today.

Output fell for the third month in a row in July, according to IHS Markit’s UK Construction Purchasing Managers’ Index (PMI), leaving the sector with a PMI score of 45.3.

Anything below 50 represents a contraction.

“The sector felt the pressure of challenging economic conditions and the impact of another disastrous drop in demand growth,” Duncan Brock, group director at the Chartered Institute of Procurement & Supply, said.”

“Purchasing activity petered out and Brexit nibbled away at confidence and decision-making.”

Meanwhile, even the usually strong house building sector declined for the second month in a row.

Respondents suggested “sluggish” market conditions meant there was less work to go around.

Commercial construction suffered the most in July, while civil engineering was not much better, according to respondents.

Clients have continued to hold off on making decisions about commercial projects until they have some clarity over the terms of Brexit. Meanwhile, civil engineering firms struggled as potential customers delayed awarding contracts on infrastructure work.

Tim Moore, economics associate director at IHS Markit, which compiles the survey said: “UK construction output remains on a downward trajectory and another sharp drop in new orders has reduced the likelihood of a turnaround in the coming months.”

“Customer demand has been squeezed on all sides in recent months, which has pushed down business expectations to the lowest since the second half of 2012.”

“Alongside the risk of a no-deal Brexit, firms reported that the potential for a snap general election created uncertainty about government spending plans.”

“Nonetheless, the sector still has the potential to enjoy a strong revival next year if, as we expect, a no-deal Brexit is averted and the government announces plans for higher public investment in the autumn Budget.”

Sector ‘sliding rather than plunging’

Blane Perrotton, managing director of property consultancy and surveyor Naismiths, said: “At best this is respite, but not relief. Total construction activity is now only sliding rather than plunging.”

“But behind the headline figure, the industry’s dashboard is blazing with warning lights.”

“New orders are falling sharply, and order books are now thinner than the Government’s parliamentary majority.”

“The residential sector, which previously dragged the industry as a whole into growth territory, is retreating into its shell. With housebuilders’ totemic ability to defy weakness elsewhere now gone, the mood on the frontline is getting steadily bleaker.”

“With three months to go until Halloween, there is no sign of the stockpiling that propped up activity in the run up to March 29th– what should have been Brexit Day.”