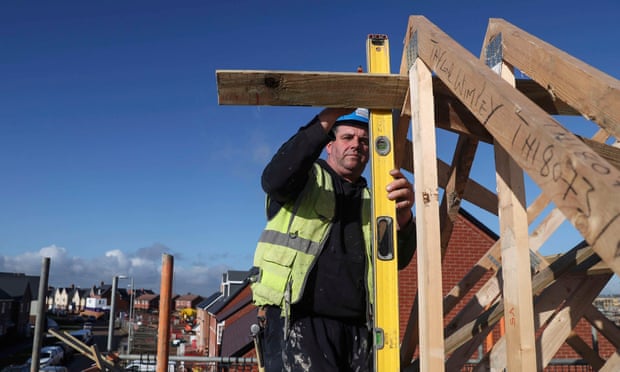 Growth slowed to weakest rate in 10 months in January, according to PMI survey Mounting fears over a no-deal Brexit are causing delays to new building projects across the UK, according to a survey that showed a significant slowdown in growth in the construction sector last month.

IHS Markit and the Chartered Institute of Procurement and Supply said growth eased to the weakest rate in 10 months in January, as the building trade unexpectedly experienced a sharp drop in activity from the previous month.

The survey of purchasing managers in the construction industry – closely monitored by the Bank of England and the Treasury – revealed that Brexit anxieties were among key reasons for delays to decision-making on new projects at the start of 2019, with a corresponding slowdown in progress on new work.

The Markit/Cips UK construction purchasing managers’ index of business activity fell to 50.6 last month from 52.8 in December, far below the forecasts of City economists, and close to the 50 mark that separates growth from contraction.

Construction firms hired staff at the slowest pace since immediately after the EU re vote in July 2016, with optimism in short supply. Building companies said the time it took for a sale to be agreed had increased, reflecting a “wait-and-see” approach to spending by clients.

Blane Perrotton, the managing director of the property consultants Naismiths, said: “Brexit fears have squeezed developer demand ever since the EU referendum, but as the prospect of a no-deal exit looms ever larger, Britain’s builders are grappling with the realisation that things could be even worse than feared.”

Commercial building was the weakest sector of the construction industry, according to the survey, as Brexit-related anxieties and concerns about the health of the British economy weighed on demand for new shops, offices and other commercial property.

Homebuilding was the strongest sector, in a potential reflection of the state support provided by the help-to-buy scheme for first-time buyers.

Max Jones, of Lloyds Bank’s infrastructure and construction team, said projects in London were particularly exposed to the risk of no-deal Brexit.

“While the suggestion is that regional cities like Birmingham, Manchester and Edinburgh are more buoyant, it’s not clear that there is enough activity to pick up the slack from the capital,” he said.

… we’re asking readers to make a new year contribution in support of The Guardian’s independent journalism. More people are reading and supporting our independent, investigative reporting than ever before. And unlike many news organisations, we have chosen an approach that allows us to keep our journalism accessible to all, regardless of where they live or what they can afford. But this is only possible thanks to voluntary support from our readers – something we have to maintain and build on for every year to come.

Readers’ support powers The Guardian, giving our reporting impact and safeguarding our essential editorial independence. This means the responsibility of protecting independent journalism is shared, enabling us all to feel empowered to bring about real change in the world. Your support gives Guardian journalists the time, space and freedom to report with tenacity and rigor, to shed light where others won’t. It emboldens us to challenge authority and question the status quo. And by keeping all of our journalism free and open to all, we can foster inclusivity, diversity, make space for debate, inspire conversation – so more people, across the world, have access to accurate information with integrity at its heart. Every contribution we receive from readers like you, big or small, enables us to keep working as we do.

The Guardian is editorially independent, meaning we set our own agenda. Our journalism is free from commercial bias and not influenced by billionaire owners, politicians or shareholders. No one edits our editor. No one steers our opinion. This is important as it enables us to give a voice to those less heard, challenge the powerful and hold them to account. It’s what makes us different to so many others in the media, at a time when factual, honest reporting is critical.