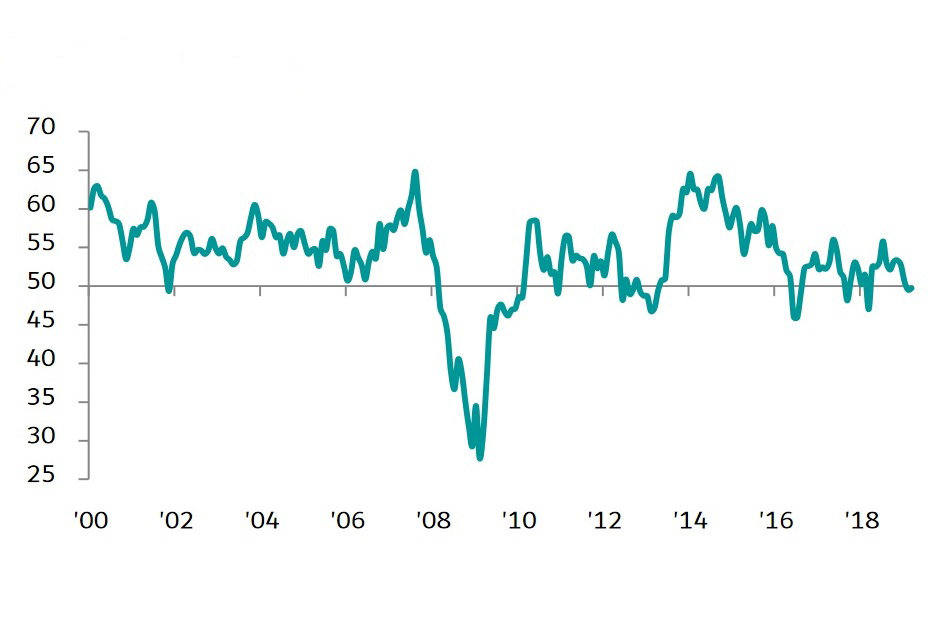 Despite the fine weather, the UK construction industry had another slow month in March.

While house-builders were a little busier than they had been in February, this was not enough to offset the effects of a further slowing in commercial work and civil engineering activity.

As the first quarter of 2019 came to end, new business and employment numbers increased only a little, suggesting subdued underlying demand and delays to decision-making among clients.

That is the analysis of the economists who put together the monthly survey of construction industry purchasing managers.

Adjusted for seasonal influences, the headline IHS Markit/CIPS UK construction total activity index (what used to be called the PMI or purchasing managers’ index) for March 2019 posted 49.7. This was up fractionally from 49.5 in February but still below the 50.0 no-change threshold.

The sustained decline in total construction activity represented the first back-to-back fall in output levels since August 2016, although the rate of decline remained only marginal in March.

Commercial construction was the worst performing area during the latest survey period, with business activity dropping to the greatest extent since March 2018. There were widespread reports that Brexit uncertainty and concerns about the domestic economic outlook had led to risk aversion among clients. Civil engineering activity also fell in March, although the rate of decline eased since February.

Residential building once again bucked the downward trend seen across the wider construction sector in March. The latest upturn in housing activity was only modest, but still the strongest seen so far in 2019.

March data revealed a marginal increase in new work received by UK construction companies, with the rate of expansion remaining subdued in comparison to the long-run survey average. Survey respondents commented on intense competition for new work and a reluctance among clients to commit to major spending decisions in March. Mirroring the trend for new orders, latest data also highlighted only a modest rise in staffing levels at UK construction companies.

Input buying rebounded slightly in March, followed a decline during the previous survey period. Some firms commented on stock building efforts as part of their Brexit preparations, which helped to boost purchasing activity. Meanwhile, suppliers’ delivery times lengthened markedly in March, which survey respondents attributed to low stocks and stretched capacity among vendors.

Average cost burdens increased at a sharp and accelerated pace during March. The rate of input price inflation was the fastest since November 2018. Higher raw material costs were attributed to the weak sterling exchange rate and, in some cases, shortages of available items among regular suppliers.

Meanwhile, business optimism edged up from the four-month low seen during February. However, the degree of positivity remained much weaker than the long-term survey average. A number of construction companies noted that economic and political uncertainty had weighed on business expectations for the next 12 months.