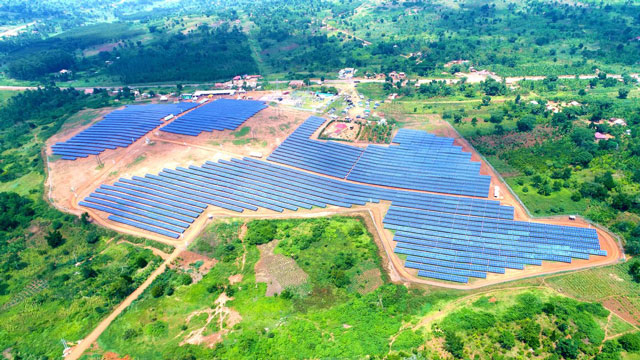 Dr. David Alobo is the Managing Director and Chief Executive Officer of Xsabo Group and an expert in economics and business. He spoke to The Ihttps://www.independent.co.ug/solar-energy-to-stir-growth-create-jobs/ndependent’s Julius Businge about his expertise and the planned US$200million investment in solar energy in Uganda.

What exactly does Xsabo Group do?
Locally, Xsabo brand is mainly associated with the pilot solar power park in Kabulasoke that was commissioned by President Yoweri Museveni early this month. The Kabulasoke power project is the first in a portfolio of five solar power projects that Xsabo Group is undertaking in various parts of the country with a total capacity of 150MW worth US$200million. We are the sponsor of youth income generation activities, the annual youth football tournament in greater Masaka, art groups and the medical youth camp which has to-date provided free treatment to over 10,000 disadvantaged and needy people in rural areas. We are also empowering girl and women groups to produce self-made sanitary pads out of banana fibres. So far more than 800 sanitary pads have been made. Beyond Uganda, Xsabo Group helps international clients expand into new markets and provide interim management services where such multinational companies still donot have the requisite management team.

What is the general philosophy of investing in solar energy in Uganda when most people believe hydropower is the most popular form of energy?
Solar power technology can do for Uganda and Africa what mobile phone technology has done for the communications industry. I believe every Ugandan can easily have reliable and enough electricity within the next eight years just as almost every Ugandan owns a mobile phone. A forward-looking study done for the German industry and the German Federal Ministry for Economics and Technology on changes to the global energy mix up to the year 2,100, forecasts that oil will account for just above 10% of the world energy mix, water (hydropower) about 10%, wind 10%, biomass 10% and solar/photovoltaic will account for over 50%. Coal is likely to become negligible in the energy mix while hybrid of solar and thermal and other renewables together will account for the remaining 10%. Uganda will therefore remain in the third world if it does not wake-up. Solar-powered cars, airplanes, industries, homes will become the norm in affluent societies. With the current disadvantageous water levels and countries like Egypt openly complaining that the many existing or planned hydropower plants on River Nile are becoming a threat to their existence, the potential for conflict and the fact that these hydropower stations have difficulty operating at full capacity must have long become an eye opener to both national and international energy policy strategists and planners.

Why did you choose Uganda as your number one investment destination?
Uganda is my home. This notwithstanding, Uganda has a solid macroeconomic record and the government has been able to ensure peace, stability and a reliable investment policy. Doing business in Uganda is also becoming easier and with attractive rewards.

How are you dealing with the very familiar challenges such as, financing, bureaucracy and corruption?
The biggest challenge any investor in Uganda will face is financing. We are lucky that we were in position to raise our own capital worth US$24.5 million (Shs91.4bn) required for engineering, procurement and construction. However, not every investor can afford that. Bureaucratic gymnastics was and remains a big headache. I have raised this issue passionately with both the President and the Vice President. Corruption was a non-starter in our case.There is a Presidential aide who asked me for US$7,000 when I requested for an appointment with President Museveni, four years ago. I told him I will never pay money to see my President.

What is the anticipated impact of your planned total investment on the economy?
Our pilot solar power project in Kabulasoke and the two other solar power parks in Soroti and Tororo have already made Uganda a role model for renewable energy on the African continent. At the full capacity of 150MW, our solar project will lead to a significant reduction of carbondioxide emissions in the country, namely 240,000 tons per year, which translates into 4.8million tons for the 20 years of our Power Purchase Agreement (PPA) with the government-owned Uganda Electricity Transmission Company Limited (UETCL). With regard to jobs, the pilot solar power park gave 400 people jobs during the construction phase. Our next power project site is expected to be almost two times bigger in size compared with our first pilot project. All these sites will provide people with more and more jobs both directly and indirectly. As Xsabo Group, we expect to provide over 10,000 good steady jobs to the population in the long-run. On technology transfer, our technical partners will soon be looking for young students in various fields to train in various areas such as electricity generation, engineering, construction and management.

You say that Uganda can achieve 100% electricity access in just 8 years. Aren’t you too optimistic?
It is not difficult to have reliable and clean power for all at an affordable rate.We just have to open our eyes. The reason we are failing on this is so sensitive..I prefer to discuss it personally with President Museveni. Xsabo Group and its partenrs has a blueprint on this which the Presidnet is aware of.

As a development consultant, how best can the government achieve vision 2040 that is running under the theme ‘A Transformed Ugandan Society from a Peasant to a Modern and Prosperous Country within 30 Years?‘
The government need to think big and be realistic. The world is expected to be a global village in the few years to come. With all due respect, the government needs more people who are exposed enough to an increasingly “borderless” world economy. A country may have a sound macroeconomic framework but wealth and prosperity will remain elusive if it does not work on the microeconomic side.We will not manage if our mindset is that the government must give us jobs and food. We need to develop innovative strategies for wealth creation by promoting the private sector as the engine for growth. There is need to restructure and stregthen the value chain right from our farms and industries to optimize efficiency, revenues and profitability in the steadily globalising world. With the right ideas, the right conditions, the right policies and the right measures, people all over the world will in a few years be talking with deep admiration about the sensational socio-economic transformation of the “African lions” and forgetting the fascination with the “economic miracle” of the “East Asian Tigers” (South Korea, Malaysia, Taiwan, Hong Kong and Singapore) or China’s economic success. I believe we can take the lead here.

What should Ugandans expect from Xsabo Group in the coming few years?
The Xsabo Group will continue to give strong support to government and the people. We will do this by powering economic growth and using commercial diplomacy to invest directly or enable investment by our partners in strategic areas that can bring us to the realisation of our vision as a country. We have the money ready for the short term, medium and long term.