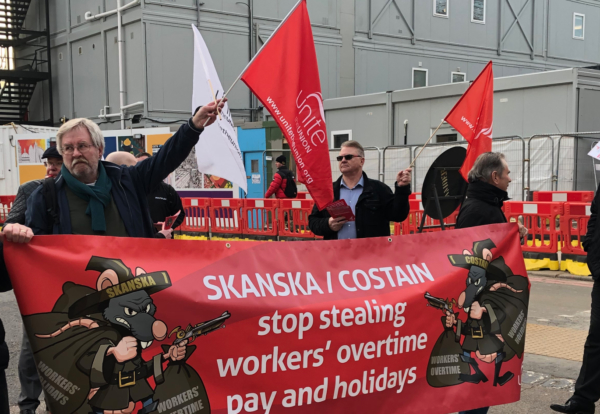 Workers on HS2 are threatening to escalate a pay row which has broken-out on the Costain/Skanska joint venture (CSJV) enabling works site at Euston.

The Enquirer understands workers met last night to discuss their next move as relations between contractors and the Unite union broke down.

CSJV said it had spoken to Bowercross who were “instructed to remedy this with immediate effect so that we meet our required standards.”

But Unite now claims the right cash was only paid for a fortnight and that workers are once again losing out leaving them “steaming angry”.

CSJV said workers were better off under their current terms than the Construction Industry Joint Council agreement.

A CSJV spokesperson said: “When we became aware of the issue, we committed to investigate and remedy any alleged underpayments.

“We found that the employees of one of our subcontractors were receiving a consolidated hourly rate that ensures their terms are better than they would be under the CIJC agreement.

“As a result employees have reverted back to their previous terms of employment, which are more beneficial for them”.

Unite national officer Jerry Swain said: “It would appear that CSJV and Bowercross have been unable to grasp the meaning of the Construction Industry Joint Council (CIJC) agreement.

“Rule 1 states, published rates are industry minimum’s and employers are expected to pay above these. The rate you are paid is the one that generates the time and half and double time overtime and not the minimum rate.

“If CSJV can’t regulate something as basic as workers’ pay, it is frightening to think what else is occurring on their site.”