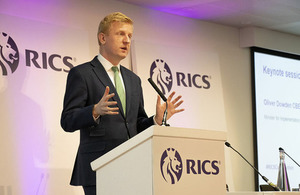 Leaders from the construction industry have been reminded that tough new rules on paying their suppliers on time are due to come into force in September.

In November last year, the Minister for Implementation, Oliver Dowden, announced that large companies could be prevented from getting major government contracts if they do not pay 95 per cent of their invoices within 60 days.

At the RICS annual Construction Conference today (May 23), he reiterated that message to leaders from the construction industry. He said:

Small businesses are the back-bone of the UK’s economy, so it’s vital that we support them – and one of the key elements of that is making sure they are paid on time.

For many small businesses, the difference between getting paid in 60 days and 90 days can be vital. That is why I have warned big businesses they must do their bit and I’ve been clear that they could lose out on valuable government contracts if they don’t.

RICS has worked with the government over several years to improve construction payment times.

We have previously recommended linking payment records to procurement decisions, and we are pleased that the new rules coming into force in September endorse this. RICS supports the changes wholeheartedly, and believe that this will lead to industry efficiencies for the benefit of all construction stakeholders, as well as supporting the small business across the UK.

The Minister’s reminder to the industry about the importance of paying suppliers on time came just a month after he wrote to more than 10,000 businesses to warn them that the new payment rules will come into force on September 1.