Buildings Under Construction for New African City on Reclaimed Land 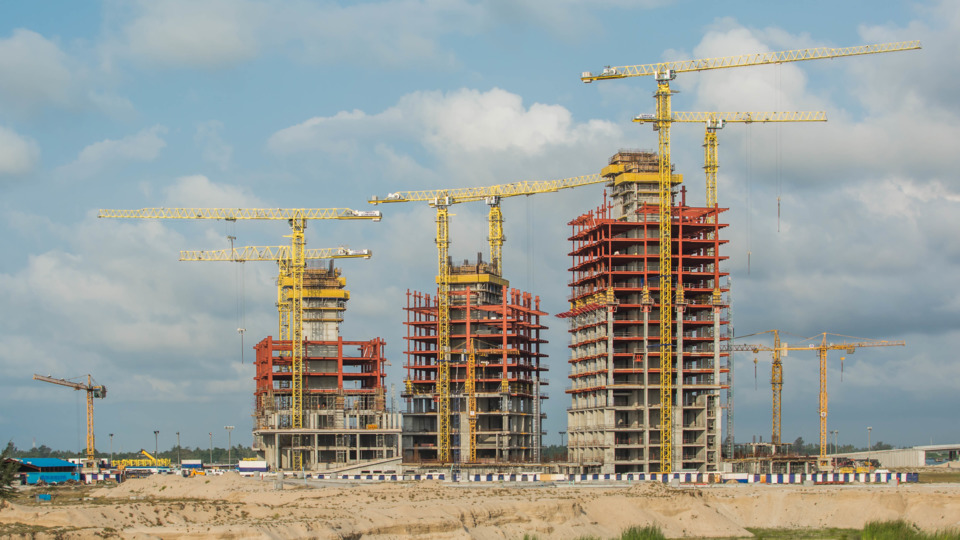 The “Azuri Penisnula” complex will be amongst the first buildings constructed for the Eko Atlantic project, a new artificial peninsula in Lagos, Nigeria

The keys of the 244 luxury apartments of the “Azuri Penisnula” complex will be amongst the first couple to be handed over of the entire Eko Atlantic project, a spectacular business and residential city under construction on an artificial peninsula in Lagos, the Financial Capital of Nigeria. The State of Lagos and the Chagoury Group are leading this ambitious project that will allow Africa’s most populated country to gain around four square miles of land that was lost to the Atlantic Ocean, hoping to create an important business hub for the entire continent.

“Azuri Peninsula” is being built at the Marina District, one of the new 10 districts of this city and the one that will concentrate most of its leisure opportunities. There are six COMANSA cranes working in this project all which belong to the fleet of the turnkey contractor ITB Nigeria FZE. The machines, all with flat-top design and maximum load capacity of 18 and 20 tonnes, are taking on the construction of the three towers that form the complex, of more than 459 feet in height and up to 32 floors.

Among the six cranes, two are model 21LC550, one is a 21LC335 model and the remaining three are 21LC290 model. All of them were erected initially with low heights, but the team from ITB Nigeria used the hydraulic jacking cages in different occasions to jack-up the machines as the buildings were growing taller. The cranes are now working at their maximum height, reaching the tallest up to 163.5 metres.

All COMANSA cranes at the “Azuri Peninsula” project were equipped with the Effi-Plus system, which increases significantly the hoisting speeds with light loads. “Due to the height of the buildings, it has been essential to rely on cranes with high hoist speeds”, says Paul Kattar, Tower Crane Manager at ITB Nigeria. “The work cycles of the COMANSA cranes on site are very short, which increase its productivity, and helps us to also shorten work times”, adds Kattar.

COMANSA’s PowerLift System, which improves the load diagram of the crane by 10%, was significantly used as well. According to Kattar, “The podium of the building is formed mainly by precast elements from 6 to 8 tonnes and concrete beams of different sizes with maximum weights up to 13 tonnes. For its construction, the PowerLift System had to assist us many times in certain operations in which we required a 10% extra capacity”.

The cranes are working 24 hours a day, lifting steel structures during the daytime and helping with the concrete works during the night. Many weekends, the tower crane team had to move and fix the collars and jack the cranes up to leave them ready before Monday morning.