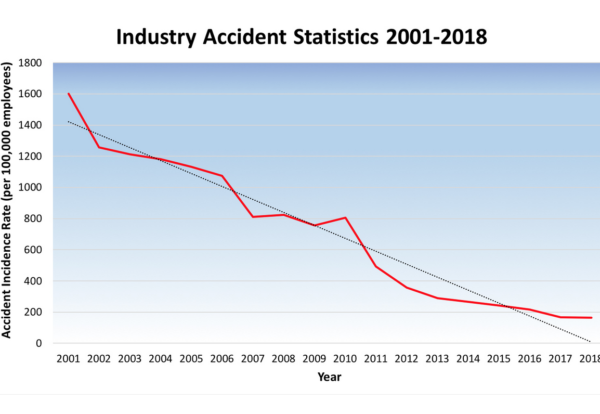 Latest figures collected by the Joint Industry Board on behalf of trade body ECA and Unite the Union show the rate of RIDDOR-reportable accidents fell once again last year to 164 per 100,000 employees.

The main causes of injury were falls, slips and trips and there was one reportable injury due to electric shock.

Steve Brawley, Chief Executive of the JIB said: “It’s very encouraging to report that the rate of reportable accidents in our industry continues to fall, and it means that the rate of these accidents is now, remarkably, only slightly more than 10% of what it was in 2001, the year we started to collect data.”

Paul Reeve, ECA Director of CSR added: “Since the turn of the millennium, there has been near continuous improvement in the accident rate reported by participating companies.

“The 2018 figures mean that the accident rate has fallen nearly 90% since 2001, which is a great achievement.

“In fact, the number of RIDDOR-reportables – in a sample of over 13,500 operatives – is now so low that in 2019 we will be asking companies for additional details of any ‘over one day accidents’.

“While these accidents are not RIDDOR-reportable, this will give us more data to work with in future.”

Rob Miguel, Unite National Health and Safety Advisor, added: “While these new figures are very welcome and show huge improvements in safety in the electrical contracting industry over the last two decades, JIB is also working to improve occupational health.”